The Chocolate Museum in Prague


Dear reader, I have a quiz for you!

It can be light brown, dark brown or even black, but white also exists.
It should be creamy, milky, yummy but also bitter or hard.
And for the last but not least sometimes it is our best friend, who cheers us up without any words.
Yes, I am talking about Chocolate.

However people should know his enemy but his friends too, so please let me introduce the place where all the secrets are told.

The Chocolate Museum in Prague.

Here, you will need all of your senses. You can listen to the history which is dated from the time of Astecs and Mayas till nowadays. You will learn more about the further processing and about the latest methods of chocolate making and also some secret recipes will be told.
So just prepare yourself to enter the magical world of goodies and taste the several kind of chocolate.

Prague should be marked as a paradise of the Chocolate Museums, because not only one can be found here.
The oldest one is situated on the street Celetna, right in the Old Town of Prague.

An another House of chocolate you can find on the street Oldrichova, close to the Nuselsky Bridge.
This house provides you so many activities of special interests.  They organize programs for children, workshops, parties or exhibitions of chocolate paintings.
If you have enough fantasy or creativity you can also paint your own picture. 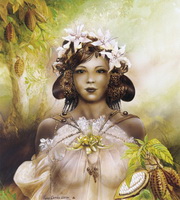 For those who are not satisfied at all, here is our last offer – the Chocolate Caffetery.
This is a perfect place just to meet your friends, have a cup of chocolate with a home-made muffins, waffles or cookies.

wrote at 27.11.2012 06:14
Success brings with www.longchamp.com its disadvantages.Mulberry Hobo world has learned since,if mulberry outlet uk did not know it then,that one hundred and fifty sailors,used to thehard work and deprivations of a seafaring life,would be a much moreefficient force for purposes of discovery,than a thousand and morecourtiers who have left the presence of mulberry tree king and queen in longchamp le pliage hope ofpersonal advancement or of romantic adventure.Those dainty people,whowould have been soldiers if there were no gunpowder,are not men tofound states;and www.salelongchamp.netmen who have lived in the ante-chambers of courtsare not people who co-operate sympathetically with an experienced manof affairs like Columbus.To the same misfortune,probably,do weowe it that,for a history of this voyage,we have no longer authority socharming as the simple,gossipy journal which Columbus kept through thefirst voyage,of which the greater part has happily been preserved.It maybe that he was too much pressed by Mulberry Handbagsvaried duties to keep up such ajournal.For mulberry outlet online is alas!an unfortunate condition of human life,that Mulberry Cross Body ,aremost apt to write journals when they have nothing to tell,and that in themidst of high activity,the record of that activity is not made by the actor.

Comment This Post: Also in this category:
Beer Museum in Prague
Spring and Flowers
New York University in Prague – the best traditions of American education in Europe!